Everything is happening at once, as per usual in reality TV land, and I’m afraid The Block is not compulsory viewing as it once was. Hopefully they have not gone for stunt casting this season as the recent spate of whiners and “villains” was a real turn off.

LIKE if you're ready to go behind the fence to see inside @TheBlock!#9TheBlock | GRAND OPENING TONIGHT 7o’BLOCK pic.twitter.com/7PokLnbMPA

They will be renovating a 1920s art deco building in the inner-city bayside suburb of Port Melbourne.
Tonight it’s on Nine from 7pm to 8.30pm, then 7.30pm Monday and Tuesday, then back on Sunday. Interesting that they’ve decided not to put it up against the Bachelor, but are happy to have it compete with Survivor and Zumbo. 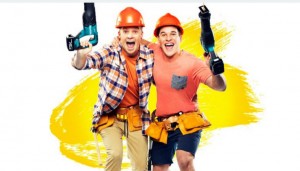 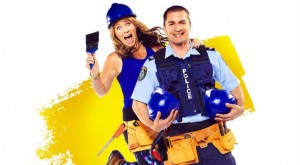 Chris, 34, Detective; Kim, 32, School Teacher
From Newcastle, New South Wales. Chris and Kim have been married for four years and they have two kids. Not much hands-on reno experience. 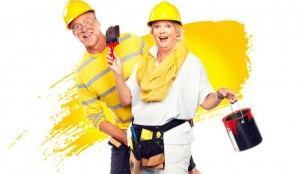 Dan, 55, Handyman; Carleen, 52, Hairdresser
From Perth, Western Australia. Dan and Carleen have been married for 30 years and have three adult sons. Good to see some people with grey hair on commercial television. This is their ninth reno so that will give them a leg up – whether they have a handle on the the styles the judges favour remains to be seen. 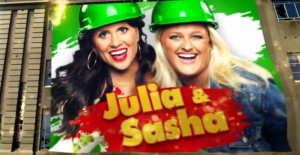 Julia, 31, Property Stylist; Sasha, 43, Software Account Executive
From Melbourne, Victoria. The pair have been a couple for four years. Is this the first gay couple on the show since Gav and Waz? I think so, which means it’s been 13 years. Julia’s skills will stand them in good stead while Sasha apparently loves doing spreadsheets, so there’s no excuse for them blowing budgets. 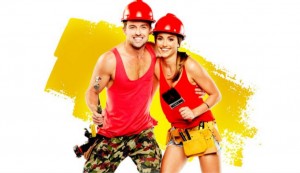 From Brisbane, Queensland. Will and Karlie are engaged high-school sweethearts who have been together for nine years. So these guys are the “tradiest” couple, but Karlie says they are indecisive. Uh oh …

MAKE SURE YOU VOTE IN THE NEW POLL