Over to B&B correspondent Daisy for her Oct precap: 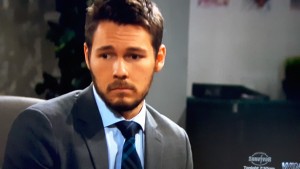 B&B Oktoberfest
October is underway and so are the troubles and predicaments in LA. Liam still can’t find a girlfriend outside of the Forrester family but we can predict is glum and anguished expressions will soon be replaced with smug ones as Stephie is sure to turn to him to escape her psychopathic mother in law. Quinn, I think will may play her royal highness of the Forrester mansion for awhile and have her portrait painted for centre stage over the fire place, which will send all the young heirs and heiresses into a frenzy. It’s nice to see Rick and Ridge teaming up to fight the intruding Quinn. Pam will be freaking out as once again, her sister’s portrait goes into storage in the shed.
What I would like to see next is a little mishap as Quinn continues to introduce Eric to the delight’s of sado-masochistic lovemaking. Something a little Michael Hutchence but maybe with Pam and the ever alert Charlie running in to cut him down just in the nick of time. Failing that, a failing ticker with a heart transplant from a sacrificial lamb. I expect Brooke may return soon from selling kaftans and she will give Eric what for. He will listen to Brooke.
Thomas and Sasha should just get on with it because they both know what they are after but are beating around the bush; both playing the supportive, understanding listener. Yeah, yeah, we know they just want to jump behind the nearest shrubbery. That’s why Sasha has been wearing her shrubbery camouflage jump suit. There you go, another triangle when Caroline and little Dougie return to reclaim the baby daddy (as they say on Judge Judy).
None of this however is certain. The only things that are certain is that, as BDD pointed out, there is a spare crib at Forresters for Quinn and Liam’s love child, should there be one, none of the Forrester or Avant babies will get colic or cry during scenes, and no one will get fat or clean their house but dust will magically disappear and floors will sweep themselves.
Bill will need a new girlfriend, but will Brooke be preoccupied with saving Eric and the Forrester empire from Quinn. And the Avants are getting boring like a suspiciously, politically correct fifth wheel. They need some action. Nicole is gorgeous but could be used in surgery to put patients to sleep. Wyatt will soon be needing a new girlfriend. Who will it be? Will he just loiter around waiting for Liam and Stephie to break up.
And last of all; do you think it’s going to hurt when Stephie gets her tattoo removed? Should Liam just get a tattoo as well? We shall see.