Paleo Pete and the Frenchman are back tonight. How far in until we hear the phrase “raze the barn”?. Will Manu still be donning his purple velvet smoking jacket? Will Pete have turned up the spray tan setting to Maximum Trump?
It’s on Seven from 7.30-9pm and the same time slot Tuesday and Wednesday, so they are going with the looong episodes again to allow for maximum advertising opportunities.
Chat away – but don’t look if you don’t want to get spoiled.

Are you ready? #MKR is coming soon. Things are going to heat up. pic.twitter.com/bGO1eIafez

HERE WE GO
The teams arrive at Kitchen HQ which looks exactly the same. Manu is wearing a shiny grey suit, which is a bit disappointing, while Pete is sticking with his traditional blue.

Manu hopes they can prove they are the best “ho kooks” in the country.
Cut to a montage of people crying, saying yuck and bitching about each other. So, same old, same old.
First to cook are the Tasmanian couple Damo and Caz. The annoying voiceover man refers to them as sweethearts – guess they don’t want to use the phrase “lovebirds” after the JP/Nellie/Zumbo love triangle. They have two young boys and live in Burnie in what looks like a gorgeous old weatherboard aka production rental.
Manu is “lacking” the menu – which is a good thing, apparently.
Entree: Truffle and cauli soup
Main: Steak with duck fat spuds and bearnaise soz
Dessert: Apple crumble cheesecake
Because they live in Tassie they can get truffles straight from the soz. Bet Henry the farmer is just delighted to hear the edit play Salt n Pepa’s What a Man over footage of him walking. No, he won’t get teased at all down the pub on Friday.

After a visit to the truffle farmers and the butcher they are forced to go to Coles for allegedly Tasmanian apples. No way have they been in cold storage for months.
Damo and Caz have chosen a music theme for their instant restaurant so deck it out like a mini Hard Rock Cafe.

IN THE KITCHEN
They are an hour late getting into the kitchen and start with the cheesecake and bread for the soup but don’t appear to get much done before the guests arrive. Everyone looks quite young – is MKR doing a Millennials V Gen X theme a la Survivor? Oh no, there’s a token over-50 pair ringing the doorbell who appear to be an older version of past finalists Jac and Shaz from Mt Isa.
Damo has mentioned he likes country music, so the edit plays When I Come Around by Green Day, that well-known country band.

THE TEAMS
Karen and Ros from Victoria are BFF midwives and are the Aussie characters of the season, game enough to let MKR film them doing hilarious things in the gym.
Amy and Tyson are a Queensland brother and sister and are the token villains. His profession is Uber driver and being a chef is his dream. What a shame the hours for Uber driving just would clash so much with studying commercial cookery at Tafe.
David and Betty are besties from Western Sydney and she is a “social media influencer”. Yes, that’s a job. Just as Tegan on I’m a Celeb is a “brand ambassador”. Hopefully we get some awesome Asian flavours from them but I fear she’s been headhunted for her look.
Tim and Kyle are the SA best mates. They have beards and seem pretty chilled. Brown beard is a bartender and red beard is an ad sales guy whose dad is a chef.
They’ve been seated next to the pretty Perth girls so they can do a flirty edit. Bek is a vet and Ash is a dental nurse. Bek (the not pale one) gets Nelly Furtado’s Man Eater as her background music.

Bek looks set to flirt her way to the top of the #MKRLeaderboard. #BekAsh pic.twitter.com/9VUMdg3Yw1

THE JUDGES ARRIVE
Yippee – Manu is back where he belongs, wearing purple velvet, and Pete is in a black tux. Cue edit of women swooning over Manu. Remember back when MKR started and Pete was the hot one? Before all that other stuff happened.
In the kitchen the word crusty has been mentioned in relation to the bread at least five times, so it could be doughy. And, uh oh – a chat with Manu reveals they have never cooked with fresh truffle before. Noooooo! Classic MKR mistake, using unfamiliar ingredients just because they sound fancy.

ENTREE
The cauli soup with truffle is presented nicely but, well, it is just soup. Last year the cop BFFs were slammed for their stodgy pea and ham soup, although the texture of this looks good.
(AD BREAK: Anyone else see the promo for Bride and Prejudice, which follows MKR? I don’t think I need to watch an hour of someone’s heart breaking because his parents are homophobic assholes, but if anyone else watches it, let us know what it’s like.)
Manu freaks the couple out by making Damo get the grater and truffle so he can get a soup that tastes like truffle. Pete quite likes it.
The villains are whispering criticisms. Tyson has rehearsed his monotone critique and emotionless stares well. 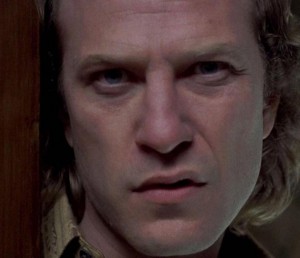 It rubs the lotion on its skin … 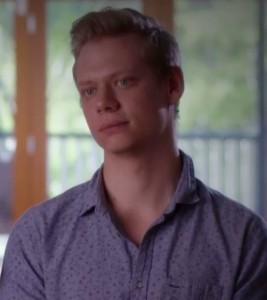 Yep, definite Buffalo Bill from Silence of the Lambs vibe

There’s an exchange over how to cook a steak, much flirting and talk of Tinder. Serial killer Tyson does not have any social media presence which, apparently, makes him a bad person.
In the kitchen, there appears to be some cooking going on. Who’d have thunk it? Damo has foolishly piled all the cooked steaks together and wrapped them in foil to stew away, so they won’t be medium rare.

MAIN
The steaks are served and Manu’s if definitely at least medium, if not medium to well. Pete says they’ve cut the potatoes too thinly and they lack seasoning. The steak is over but the soz was great.
Brown beard woofs his down and flirty blonde and several others hand over their leftovers to him. So they food must have been served in a timely fashion, as no-one’s starving.
Erk, this episode is draaagging on … why does MKR insist on stretching the instant restaurants out to 90 minutes? (Yeah, I know: ad revenue! Speaking of which – ok, we get it. Social Media Influencer Betty’s mum is blind. That’s not good but enough, already!)
Tyson is doing his deadpan criticism and it’s getting brown beard’s goat, which is why they’ve been cast in the same round.

Back in the kitchen they Caz is making stewed rhubarb, which I whipped up a few days so I’m hoping she goes well. Tyson is right: A slab of cheesecake isn’t that flash a dessert for a cooking comp but remember how well the Ducks Nutters did with their cheesecake last year, so it could score highly. Although Damo could be marked down for his woeful music-themed puns.

DESSERT
It’s very simple on the plate and the base looks thick (sorry, MKR hasn’t posted food pix on Twitter yet). Manu likes it in general but says it’s too dense from sitting in the fridge too long. “I found this not pleasurable to eat,” says Pete. He liked the rhubarb and the crumble, but not the heaviness of the cheesecake part.
The guests are rather kind – except the villains, who are actually more restrained than baddies in the past but we’re getting dramatic music so we know how evil they are.
So there we go: two okay meals and a stodgy dessert. Damo and Kaz seem nice but not strong cooks. They could hang around a while, though.

Take a breath and get ready for the moment of truth…are the judges happy? #MKR #DamoCaz pic.twitter.com/pNPn4ddpJC

There’s a “surprise elimination twist” yet to be revealed, so who knows if they are safe. That score could go either way. Tomorrow night it’s BFFs David and Betty’s turn.