I’m sooo disappointed it’s not time yet for Colin Fassnidge’s instant restaurant round on My Kitchen Rules. We need more of this:

Instead we have Pete and Manu back on Seven at 7pm for the second round of the IRs. Surely the teams can’t be as mediocre as the first bunch (Beardies and Villains excluded)? First up are the Sydney sisters – one of whom is being promoted as a blonde airhead. The fact she calls coulis “coolant” makes me worry she is a cook of the Ducks Nutters’ ilk – remember their love of jews?
Oops, sorry – it’s actually the Sydney brothers Albert and Dave up first with some Cantonese food, despite the fact the promos were all about the blondes.The producers have made them put up a photo of their smiling mum in the kitchen, which is just weird. Who has family photos near the sink? At first I thought she must be dead but mum is very much alive and has taught her sons how to cook.
The bros moved from Hong Kong when they were young but the editors play Gangnam Style over their intro, which is actually a South Korean song. Hong Kong, Korea … same diff in MKR land.

Brothers #AlbertDave are up first and it's going to be colourful #MKR pic.twitter.com/H6zz4NPiy0

Entree is Eight Treasure Fortune Bag with scallops. Luckily Manu tells us this is another name for money bags. The boys say they are going to put a twist on it.
Main is Hainan Chicken – yum – I love this. It looks simple but there is a lot of prep involved in the stock and sauces. Adelaide’s own Poh Ying Leow made this on her season of MasterChef and was scored highly for it.
Dessert: Hong Kong Egg tart with warm banana
Back at home the boys are setting up their restaurant and someone convinced them that menus that need to be folded into origami shapes was a good idea. The clock is ticking, boys! They have lost an hour by the time they finally get in the chicken.
Their kitchen is quite a narrow, long galley style – I’m surprised they didn’t make them move to another house as the camera can’t film from many angles. They decide, apparently spur of the moment, to create a potato next to rest their scallops in. Luckily they just happened to have potatoes.

TEAMS ARRIVE
Here come the guests and there are a few “Tysons” in the bunch – let’s hope they can cook as well as him. Seems unlikely.
The sisters are the first to get the proper intro and they do the “lovely to meet youse”. They are bubbly and very screechy talkers. I would not want to be in an enclosed space with them.
Della and Tully are friends from Queensland – one is a construction lawyer and the other works in indigenous health. Della is another big, warm personality.
Court and Duncan are Melburnians. He has a beard; she is a kook and their “thing” is overt PDA. Hmmm …
Josh and Amy are from Broome, so hopefully we will get to see them cook some great seafood later on. He is a deckhand – and not afraid to talk himself up.
Physio Matt and Alyse (who’s “in construction and is a fashion stylist on the side) are professional Fashions on the Field entrants. Urgh – I hope they aren’t those types who travel around the country races just so they can beat out a local. She drops that she is happy to spend $1000 on a pair of shoes. That’s a great way to endear yourself to new people.

In the kitchen the boys are serving the entree in egg wraps rather than deep frying them, and their last-minute potato nests finally seem to be working out.
Here are the judges and what the hell is Manu wearing? Some kind of double-breasted black brocade bedspread jacket, straight from Hugh Hefner’s bed. 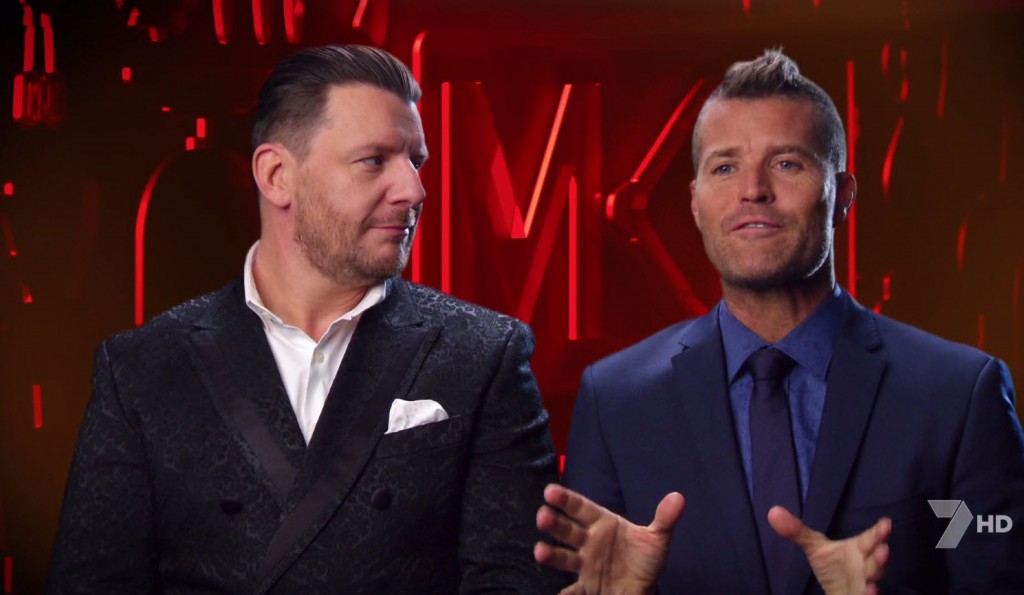 The boys are having trouble tying their fortune bags with their spring onion “strings”. The stress is getting to then.
(Sidenote: In the ads there was a promo for an MKR The Chase special, Thursday 7.30pm. It’s hard enough watching some of these cook; I don’t think I could suffer through them stuffing up again on a quiz show. Especially if Andrew O’Keeffe is involved.)
Finally they have to skewer the folds closed instead.

ENTREE IS SERVED
Manu chides them for uneven cooking of scallops (the pan was quite overcrowded). Pete says they wasted time on the potato nests. They are bagged for their bland egg wrap and the filling was just ok. Aww, poor bros. They seem like perfectly pleasant young fellows. I hope they can lift from here.

Deckhand and Stylist on the Side (who are from different teams) are both quite critical at the table. Is this a faceoff for biggest villain. They speak the truth bit kooky Court starts weeping with empathy for the boys. They can’t have been at the table that long yet! If she’s crying on the first night what’s she going to be like at the end of the week?
Later she tells the table she is a “recovering vegan”. Deckhand has zero sympathy for her.
In the kitchen the boys aren’t cooking the Hainan chicken the tradition way which could bite them. Usually a whole bird is submerged in the stock and then carved but they are just poaching tenderloins to be “healthier”. Hmmm – so they will be missing the flavour the fat brings. As they prep their three sozes Manu comes in to make them nervous about not using the whole bird, but the boys counter with the ultimate defence: “It’s how Mum does it.”
At the table it’s getting rowdy and I am going to have to turn the volume down every time those girls screech. Ouch!

MAIN IS SERVED
Pete tells them their chicken was inconsistently cooked and the broth needed more flavour. The rice was undercooked but the sozes were good. Perhaps one bro should have tagged Mum in to the comp instead. Luckily Manu’s chook was cooked well, but not as tasty as the “real” thing.
Poor Della gets at least one piece of undercooked chicken. And Court is crying again.

Back in the kitchen it’s time to make the egg tarts and I’m willing the boys to have a success.

DESSERT IS SERVED
And I know some of you will be pleased to notes the guests got to use a fork – no trying to break through pasty with a spoon. Pete says the tart is sensational and “technically perfect”. Manu agrees.
Cue kitchen high fives.

So the boys redeemed themselves but they had two almost inedible courses. It will be a low score but they are first off so the teams may be more generous than they deserve.

TOMORROW NIGHT
The sisters cook. I hope there are subtitles so I can turn the sound down. Channel 7 is promoting “The Incident”, which seems to involved the physio making sexist comments. The ads make it seem Tully takes him down, and, if so, I say “Tully for the win!”.
Ok, quick, time to watch Keira go into the jungle on I’m a Celeb before I accidentally catch a glimpse of Hoges.