Biggest Loser: Transformed started on Tues at 7.30pm on Ten.
This is the first series in a while without Michelle Bridges and Commando.
Shannan will be joined by a trainer called Libby, who was cast because she has the mandatory high pony tail.

The premiere goes for 90 minutes but the following day’s show is only 75 mins. There’s also a Thurs show, then on Sunday it takes the 7pm timeslot.

Australia, it is time to transform.
The Biggest Loser: Transformed starts 7.30 tonight on TEN. 💪 #TBLAU pic.twitter.com/42Z6mKIbxQ

AND SO IT BEGINS
We start Survivor style, with people taking a boat journey while the the music crescendos, interspersed with soundbites about their “jurney”.
Finally they arrive at Biggest Loser HQ and it’s a funky warehouse instead of the usual old house. There are mannequins dressed in clothing to representing their goals.

Nikki, 25, has a “dream bikini”. She lives in Queensland but never swims at the beach with her family.
Brett is an ex-pro boxer turned stonemason. You can tell he will lose the weight quickly because he still looks quite muscular and will be used to training.
The contestants are allowed to mingle and chat.
We meet the young flight instructor who was on the ads and Jeanie, who is 60 and an ambo who enjoys endurance horse rising.
The contestants are then surprised with supportive videos from their families – the sort of thing that would normally be saved for midway through the season to get the tears flowing.
And here comes the gorgeous Fiona – ah, remember when she was in the black leggings and blue BL tank top, sweating away with the rest of them … She’s a relatable choice for host but I still kinda miss poor Hayley Lewis and her sincerity.
Fi explains things are a bit different this year: the person who loses the most weight gets $50,000. Hmm – is that less than in previous years. The final six contestants will enter the “transformation week”, where they get to return home for a week. The Australian public will then decide who has transformed the most, and vote for who gets the $100,000 grand prize.

Libby is one of those Energizer bunny types who likes to talk loudly and very quickly. Hopefully she will settle down a bit once she’s shot a few episodes. Shannan reminds us he’s still super passionate after 11 years filming the show. Anna, 40, an apprentice butcher (now, that’s interesting – hope we get to here about that) is beside herself to be in his presence.
There’s a lot of talk about how it’s not just about being skinnyy. but transforming your mind also.
They are split into two teams of eight and, with Mich and her concubine Commando gone, the red is ditched and we have orange. First up is weepy Nikki, who wants the bikini bod. She weighs 78.1kg which would make her one of the lightest contestants in the show’s history. She’s not very tall though, I guess. Instead of the usual humiliating group weigh-in, producers have taken a photo of the contestants in their black skimpies which they can then Photoshop to show them looking skinny. Guess this means she’s not the first boot or they wouldn’t spend so much tie on her. Clapping a photoshopped image of someone who’s been made skinny is a bit freaky, though.
Shannan – who we know is all about boxing – gets the ex-boxer so they can bond in the ring. He’s 116.8, so again much lighter than most of the blokes from previous shows.
Here comes Steph from the ad, the school teacher who doesn’t want to get married until she’s skinny.
Butcher Anna is picked by Libby and tries to hide her crushing disappointment that Shannan is not her trainer, but it’s all just a psych out. It IS Shannan and she’s stoked. But he quickly makes her cry but getting her to talk about being a foster mum and gaining weight after seven failed rounds of IVF. Ok, Anna has to win this, right?
But there are more people yet to be photoshopped and things are lagging a bit here.
One of the guys has an insulin pump for his Type 1 diabetes, but we don’t get to hear anything about him, which is disappointing.
The excavator operator who wants to be a police officer is the heaviest person on the show, at 147kg. Given they’ve had blokes around the 250kg mark before, he’s a lightweight.

TRAINING BEGINS
Blue team heads to a boxing gym. Poor Matty treats the punching bag pretty much as I would – afraid it might bite, he is giving it fairy taps. Come on, Matty – you can do it!
Orange team’s gym is more like a traditional set-up with a few more pretty lights. Libby has toned it down a notch and says her philosophy is about people training so they can live better lives, not living to train. You get the feeling Mich Bridges is the exact opposite.
Poor diabetes pump guy – who actually doesn’t look that heavy but he is a very tall man, so carries it well – is struggling but pulls through in the end. No-one collapses or throws up which is a change from past seasons, although the series is young.

FIRST CHALLENGE
As the sun rises it’s off to the edge of Sydney Harbour for a tandem kayak that’s 3.5km long. Everyone pretends to be pumped but Matt is the voice of everyone watching at home, saying he’s “shitscared” of sharks. Crying bikini girl cries some more because she is also scared of sharks. She is going to lose at least a kilo through dehydration. Steph who can’t buy a wedding dress has a migraine and sits out the challenge, so one of the orange dudes who has kayaking experience goes solo.

This is the toughest first week challenge we've ever seen on The Biggest Loser – which team would you like to see win? 💪 #TBLAU pic.twitter.com/DFJmrdzgJN

Orange team gets off to a good start in the swim leg, but then everyone has to do one of those exhausting sand digs for their other paddles. If this was Survivor they’d be calling in the medevac chopper.
Quite a few contestants have been kayaking before but a couple of them are spectacularly unco (as I would be). One team capsizes into the freezing Harbour. Getting back in the boat is a struggle but they have some surf lifesaver types to lend a hand and Libby to yell encouragement from her dry vantage point on a speedboat.
The water is looking pretty choppy and poor Matty capsizes, then freaks out and gets caught in his own head. Finally he gets back in the boat. I really, really hope Matty is not the first boot, because it’s not looking good at the moment.
Insulin pump guy (whose name is apparently Jake but I’m just going to call him Lost Baldwin brother because he looks a bit like Alec with young Stephen’s hair) is struggling because he hurt his should in the first-leg swim and his partner, Weepy Bikini Girl toughens up to get him back on track. 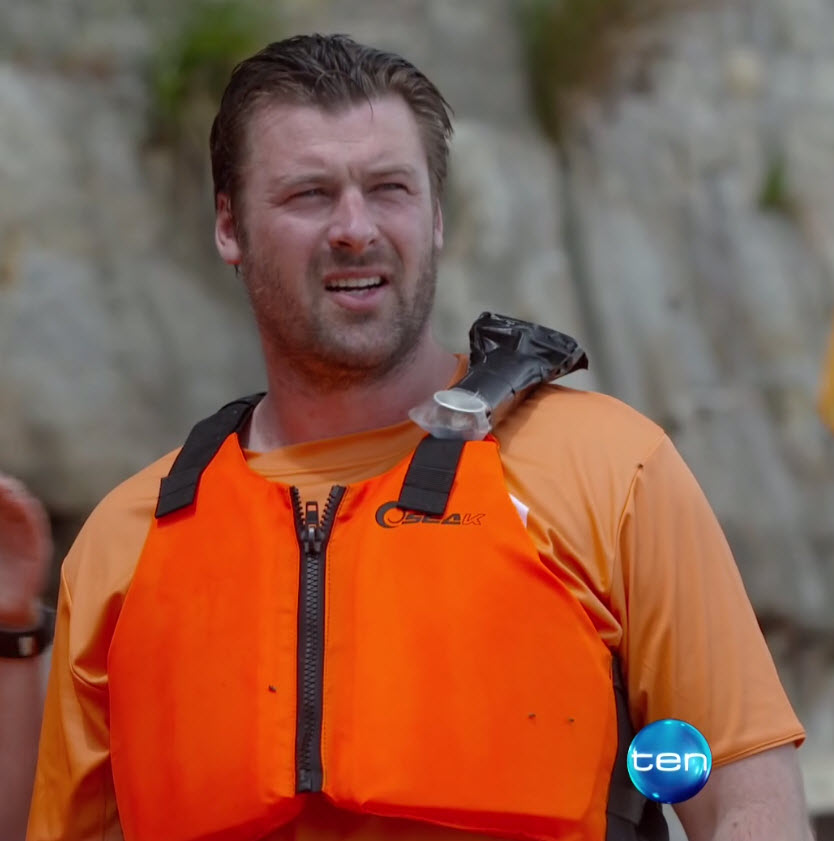 And then someone spots a shark. Eek! Hopefully Lost Baldwin Borther’s loud moans scared it off.

Nikki's worst fear has surfaced, will she be able to push through it head on? 😳 #TBLAU pic.twitter.com/BlV60aPKSy

No one on the crew seems worried, though, because this is Straya. Orange team topples again and then hapless Matty follows suit.
One orange team comes first and the blue team with the 60-year-old woman comes second. Last place Orangers (Sophia and Josh) fall out for a third time. Poor buggers. They’ve dropped out of sight, along with Matty and Brett.
With the beach in sight, Matty capsizes again, despite Shannan spouting inspirational soundbites at them. Why doesn’t Shannan just go with: “There’s a shark behind you!” That would work on me.
This time the safety crew isn’t allowed to help them back in the boat. After multiple capsizes Sophia makes it to land by by paddling with her feet sticking out the side of the boat. So orange team wins. Finally his boxer partner hauls Matty back in the boat and Shannan is so excited he yells “see what youse can do!”.
By winning, orange gets a “power bracelet” which makes a team member immune at the weigh in. So, pretty much the equivalent of a Survivor individual immunity necklace. The teams decides to give it to Weepy Bikini Girl for conquering her fear of sharks.

What a day for Nikki – first overcoming her worst fear and now securing immunity! 👏 #TBLAU pic.twitter.com/BMXqiiZe2e

Seems a hasty decision – they should have given it to the girl with the migraine as she won’t have been able to train.

TOMORROW NIGHT
We get some recipes and learn nutrition stuff. Cool – glad they brought back the recipe bits. Don’t know if I’ll watch every night but that wasn’t too bad.
AND ANOTHER THING
TV blurb for tomorrow says one contestant leaves after only one day, so there must be a medical issue. And, on Facebook one person says they met Shannan, who told them that the voteout format has been ditched, and instead the people with the three smallest weight losses have to do battle in some kind of challenge. I hope this is true.