Yes, it’s finally the heavily promoed night when the Seafood King cooks and Other Amy walks out – surely for all of two minutes?
Here’s the current leaderboard, so even if Josh and Other Amy somehow get even mediocre scores they will still probably with to do battle in Kitchen HQ with the midwives. 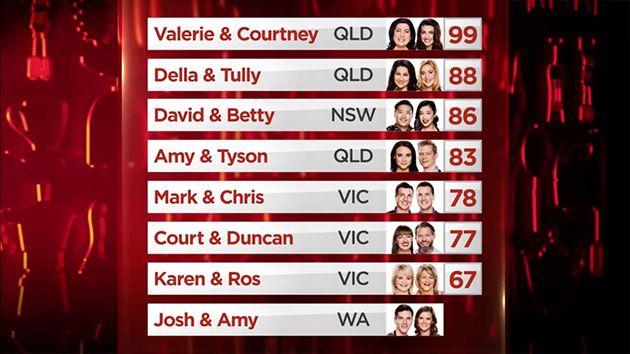 Because Josh is the Seafood King, the entrees are both fishy: whitebait with salad and seafood chowder with damper.
Main is pork belly adobo with rice or blue swimmer crab with salad.
Dessert is something I can’t see because Pete is holding the menu too low – must you ruin everything, Pete! It looks like a Dutch word, though, in a nod to Josh’s background.

They start with a stop at the seafood shop, and how good do those prawns look! I really need to visit WA.
The go to Coles … yadda, yadda yadda …
In the kitchen, Josh says Other Amy is the head chef and they are going to have fun. Yeah, but no.
Dessert one is Koeksisters meet Dom Pedro and Pete and Manu are baffled.

Thanks to Dr Google, I now know it’s a honey doughnutty twisty thing (picture and recipe here). And a Dom Pedro is a South African drink with vanilla and Kahlua, so I guess that’s their ice cream.
Amy explains she has South African heritage, so I guess Josh’s Dutchness (as opposed to his douchiness) does not come via Cape Town.
Dessert two is Crema Catalana with Spanish biscotti.
Josh decides to put extra wine in the marinade because “I know what I’m doing”. Amy tells him a million times to leave her some coriander for their rice dish. His pot of crabs is so huge he has it sitting on the floor to marinate. Amy is doing all the jobs requiring measuring and taking care. The camera keeps cutting to the herbs floating with Josh’s crab, so you know he has used all Amy’s coriander.
He is happy with its fish stock because it smells “manky”.

The guests arrive in what looks to be sweltering heat. The midwives are both sunburnt with strong tan lines. Court and Dunc appear to be more awake this episode and are happy to oblige the producers with some snark. Must be the Hashtaggers’ night off.

Shots fired! Not like the food is the most important part or anything 😂 #MKR pic.twitter.com/nxm1yjCKTH

It must be really hot but Pete and Manu aren’t even wearing suits.
Josh wants to score around 86. Modest fellow.

In the kitchen Josh is talking the talk about his seafood prowess and Amy is getting testy. At the table, the other teams who ate Josh’s food before are filling the others in on how bad it is. Amy (Tyson’s Amy) mentions the WA team is the Steven Bradbury of the competition. Then there is a lot of chat that sounds like a teacher trying to describe a terrible student in a polite way. But then Court just basically says he’s a dick.
There is much bickering in the kitchen over plating up and Josh suggests they will get divorced after this. Nice.

Entree is served.
Pete had whitebait but says all three components kinda sucked. The fish wasn’t crispy. Manu had the chowder and says “zis plate is a picture of stress”. The seafood was well cooked but they should not have blitzed the vegies.
Tyson says the whitebait is more of a bar snack than an entree – good call, Tyson.
For once, Court is not the one crying. Hashtagger Betty is all teary because she “can’t even think of a hashtag to give them. Hashtags are for fun” and they are not respecting the produce. Everyone else at the table thinks she’s gone cray-cray in the heat. Or perhaps ti’s the weight of those giant earrings giving her a headache.
Cut to Amy: “And the Logie goes to …” How much do I want Tyson and Amy to win this competition.

Back in the kitchen, Coriandergate has started. Amy has the shits big time and accidentally overreduces her soz. She complains the adobo is so boring-looking as it’s just brown and white. They did have parsley inn the fridge – at least it would have been a touch of green. Or perhaps a lime wedge? Or even some thinly sliced chilli.

Main is served
Pete has the adobo and the soz wasn’t balanced – it was too salty and needed something green. “Not enjoyable after the second bit,” he says.
Manu normally loves blue swimmer crab but they just tasted like wine. He says there is no need to ever marinate crab in wine. “If you, Josh, were sitting here tonight, you would take this apart.” He tells them to pull it together for dessert.

In the kitchen Other Amy starts crying and Josh has no idea what to say. They walk outside for a minute to cool off (so it wasn’t really a walkout – what a shock) and the guests can here Other Amy swearing. There are tears and swearing but they decide to carry on. The guests feel totes awks.
In the kitchen Other Amy is happy with her doughnuts but lets Josh who has never done it before, use the blow torch to caramelise the sugar on the other desserts. Just do it yourself, Other Amy!
Please can this race to the bottom just be over already. The promos say tomorrow is the quarter finals but we still have a million teams left.
Amy keeps adding alcohol to her dessert milkshakes and after numerous tastings starts to feel better.

Dessert is served
Pete had the doughnut and cocktail. The former was dense and the latter way too alcoholic. Manu’s crema was liquid and had no flavour and the sugar wasn’t caramelised. “It’s not even funny any more,” he says.
Pete: “You’ve had highs in this competition – just not tonight.” Really? When, Pete? When were these highs? Did I blink and miss them?
Over to Original Amy to describe the milkshake: “It kind of tastes like Bubble O Bill had a bottle of whisky.” I hope she gets a regular gig as a food reviewer after this.

Instead of showing the teams’ scores we skip straight to Pete and Manu, and instead of a Kitchen HQ battle the twist is it’s an on-the-spot elimination. So the Seafood King is done for.

Finally – no more Josh!
Cue montage set to “Simply the Best”. Strangely the “slut” footage didn’t make it.
From tomorrow, one team goes home every night. The teams left are:
The Scores
Midwives
Hashtags
Mates
Court and Dunc
Della and Tully
Amy and Tyson
Mum and daughter
Brown Beard and Tim