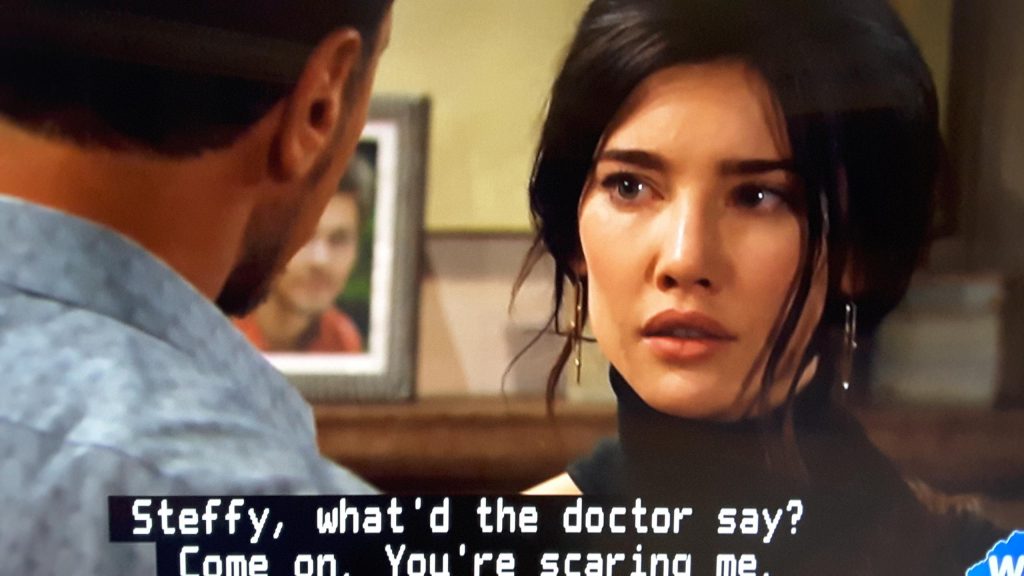 To all of the Aussie Bold or Beautiful, we are now in the midst of a paternity maelstrom. Stephie is lucky it’s only a toss up between two possible fathers, but it’s painful non the less as she stands to rip apart the father and son she fought so passionately to reunite. I know you are faithful followers out there, so rather than recounting February, I will instead pose some deeply disturbing questions.
1. Where the hell was Shedevil on Christmas day. We were all expecting her to be handing out a tray of lemon bars; perhaps sent over as part of Il Geordino’s catering team. Could she have turned over a new leaf? Why has she not been over in her lingerie to collect her portrait?
2. Which room will Thorne get? Will it be the adjoining suite? And does this mean that Brooke will now have to give up hopes of marrying Ridge so that she can steal Katie’s new lover? How dare Thorne move on so quickly. Will Thorne start a new line; Katie’s bedroom line?
3. Has Katie been using her telescope to eyeball Maneo?
4. Will little Lizzie ever see Santa? Or will she be a twelve year old before she is allowed to come downstairs from napping, like an American Sleeping Beauty, to finally open her presents. It’s her second Christmas and she’s still a no show. On that, who is upstairs minding her? Where is the baby monitor? And will she be a natural fashion designer? Or top model?
5. Why couldn’t Zende afford to fly home for Christmas? And will he get Sarsha pregnant, thus rubbing salt in Nicole’s wounds. Will Nicole get so mad she has a sex change, thus giving Mr Avant back the son he lost?
6. Has Ivy refused to sleep with the writers? Or did she p*ss off Stephie by being too tall and too lovely? Or did she p*ss of Quinn for being a brunette with Elizabeth Taylor blue eyes? Rumour has it, Ivy is spreading her Aussie hopes a bit further afield in the hopes of bigger stardom. Does it even get bigger than B&B?
7. Who played footsie with who under the Christmas table? Were Donna’s legs long enough to reach the big money?
8. Will Liam quit work to play stay at home dad? And if he does, will he grow let himself go and grow a pauch like Wipe’s?
Perhaps March episodes will answer some of these perplexing questions. I am just hoping, that above all, baby Willemena is a girl and that she looks like Bill and likes steak. In spite of the doctor announcing otherwise, the biggest, most burning question of all is is Bill the daddy. Wipes will want to know if he is an uncle or if he and Liam get a new baby brother or sister. The latter will be more fun.