Nigella Lawson is here for the week, so hopefully she will try and teach George manners again.
It’s a mystery box challenge.

Everyone is freaking out that Goddess Nigella has descended from the heavens. The judges are in all blue and Matt has toned things down so as motnto distract from the colour pop that is the goddess.
What’s in her Mystery Box?

They also get the usual staples; 75 min to cook. Five dishes will be tasted.

The winner wil be in the immunity challenge and is flown to London for afternoon tea with Nigella. Cue exploding heads. 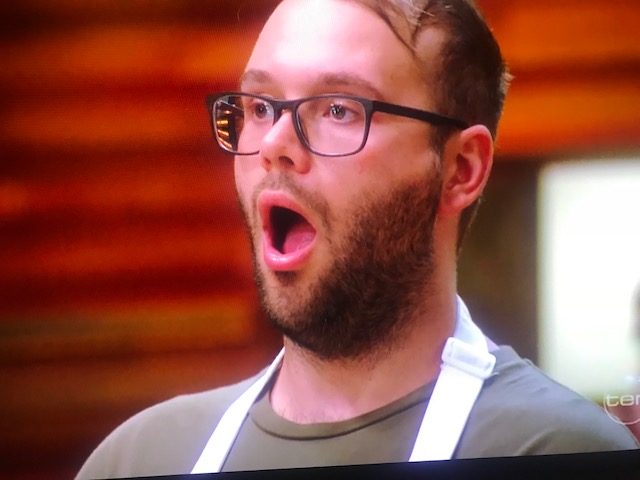 Reece is playing it cool until Heston week.

The judges wind up Kristen by telling her passionfruit with squid is a dicey combo but I googled it and there are tonnes of recipes.
Nigella is giving contestants some handy tips, like using a spoon to peel ginger. Nice change from disinterested Heston.
Oh no, we are getting a talking head from Genene about her rough trot thus far. So she’s in trouble. And she’s making semifreddo, so there will be setting issues.
Hoda is making “cotton candy” but I guess she means Middle Eastern fairy floss, which is less sweet.
The young dessert girl, Jess, has the red mounds of death out. She’s doing a Snow Egg inspired dessert.
Reece is doing chicken liver parfait with crackers.
Uh oh – Hoda is having fairy floss trouble because she does not have lemon juice. Try vinegar, Hoda! Nup – she had to ditch it.
Gina the Italian nonna has made a really interesting looking pasta and squid dish.
THE JUDGES TASTE
Reece’s parfait: it looks like that room Matt and Kim did on The Block that was paint splatter everywhere – the crime scene. But it tastes good.
Genene: I was wrong – she got a dish up. It’s an A cup of passionfruit semifreddo on a round of thyme crumb. They adore it. Poor Genene is overcome by the praise and starts crying.
Gina’s pasta with salt and pepper squid: they like it (and I realise Matt pronounces it pas-ta not pass-ta).
Jess’s “snow egg”: she was 10 when Peter Gilmore had it on the show. Yes, it’s eight years since Callum and Adam made it. She tells The impressed judges she has never travelled because her mum keeps her “in a bubble”.
Kristen’s squid: “That is really quite something,” says Nigella.
THE WINNER IS …
Kristen! Good one, South Straya! She’s thrilled.

INVENTION TEST
It has to be a dish that snaps, crackles or pops – the judges are all about aural. Open pantry, garden in play and 75 mins.
Adele of the dodgy corn fritters is doing Cajun chicken pasta with chicken skin. I am worried about Adele.
Ben the seafood specialist does a smart pick, using crab claw for “snap”.
Jenny’s snap will come via tempered chocolate – tricky in a warm kitchen with little time.
Khanh is using pork crackle and Jess a black sesame tuile.
Loki is doing a coffee and chai ice cream with popping candy.
A few randoms explain their dishes and then it’s Hoda again, with halva, date ice cream and kataifi pastry. Ambitious.

The judges tell Adele that Cajun chicken pasta is weird, so she switches to chicken and mushroom pasta. She’s still in trouble.
Chloe is not making noodles – she’s doing a nougat dessert with Snickers flavours.
Reece has gone back to his usual dessert comfort zone and making a chocolate mousse with tuile.
I like that we are hearing from more contestants but I still have no idea what Sashi and Brendan and that butcher guy are making – and Brendan is getting the early days silent edit with the odd flash of brilliance that means he could be a finalist.
Oh – Lisa is in the comp! She’s cooking fried chicken.
The judges head back to Adele and tell her they still don’t like her dish. To her credit she keeps changing it up, and decides to fry her pasta noodles.
Jenny is having trouble with chocolate seizing.
Aha – Hoda is making a Middle Eastern cornetto. Cool.
Jenny is definitely bottom three – her chocolate work is dodgy. And she knows it.
Chloe’s nougat as not set and it looks unfortunately turd like.
We get shots of a lot of pretty dishes by people who did not get camera time.

THE JUDGES TASTE
Ben’s vodka chilli crab: They love it.
Khanh’s Vietnamese pancake: Good.
Jo: Pork with crackle and parsnip chips. Good
Jess: sesame panna cotta with squid ink tuile. Super pretty.
Jenny’s chocolate bowl: Nigella has trouble cutting into the truffle and Jenny must be dying inside. It’s bad.
Reece’s warm. Vic mousse with burnt butter ice cream and tuile: “sensational”, says Nigella.
Adele’s chicken pasta: She knows she’s in trouble and wishes she’d made her original dish. It’s a dry plate of food, says George.
Lisa’s double fried chicken: There’s a lot of crunching. Gaz is in heaven.
Sashi’s sour fish with crunchy skin: “so good” says Nigella.
Brendan’s squid noodle pad Thai with prawns: they like the crunch.
Model Michelle: her white choc dome worked and they like the sesame nougatine and ice cream.
Chloe’s Not Snickers bar: it looks bad but she hopes the flavours work. “It’s near inedible because it hasn’t set,” says Matt.
Loki’s ice cream with popping candy crumble: He’s made it for his son and is a failure as a stay-at-home dad if it sucks. Ok, Loki, just turn the analysis down a notch. Nigella says it’s one of the best ice creams she has ever eaten.
Hoda’s Middle Eastern cornettos: Matt says 10/10. “I’d fly from London to Melbourne for that – I have!”

I’m thinking Chloe, Adele, Jenny for bottom three and top three Hoda, Reece and Loki.
Oh – it’s Ben, not Reece, but he gets a shoutout from Matt, as does Lisa for her crunchy chicken.
The bottom three are as expected. What a big drop for Chloe, who was in the immunity test last week. Perhaps the extra experience she has had cooking under pressure will help her and she seems calmer in the kitchen than the other two.

TOMORROW NIGHT
The bottom three have to make four of Nigella’s chocolate desserts.