Woo hoo – MasterChef is back! Thank his for a cooking show where everyone knows what a colander is. 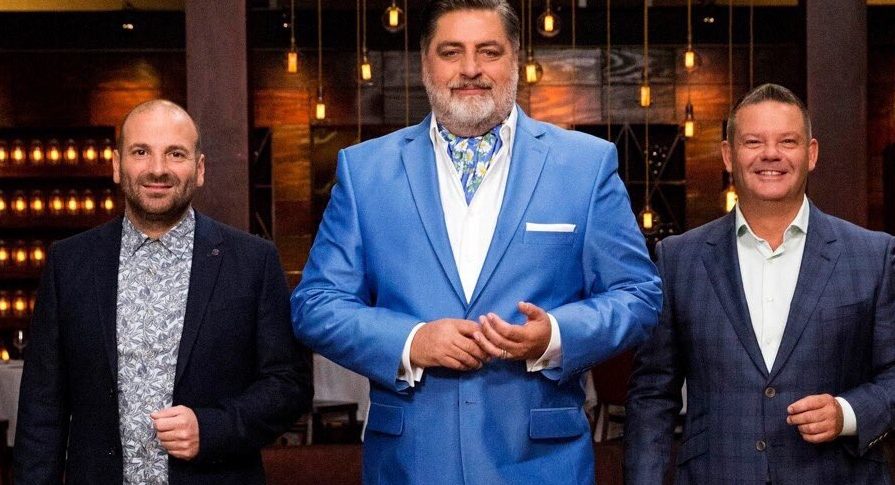 Shall we play a game and see how many episodes before all the following happen?
1 The word journey is uttered
2 Dead grandparent(preferably of European origin) is mentioned as inspiration
3 George ends a sentence with a questioning “yeah”
4 Matt dons a blue tartan suit
5 Gary is a bitch to a contestant
6 Someone makes ice cream that does not set in time
7 A huge fuss is made over whether meat will be cooked in time but everything is actually fine
8 Someone cries
9 Someone says they don’t usually make desserts
10 A sous vide machine is used
Feel free to add anything I’ve missed in the comments.

SEASON PREMIERE
The wannabes enter the MasterChef garden with their families and the set designers have done a great job. Wish I could say the same for wardrobe. What is Matt wearing? A dark tan suit with apricot kerchief and cravat? No – just no! Please go back to your blues and purples, Matt.
All 10 previous winners make a surprise appearance and there are a couple I have to think about, especially as Emma Dean looks so different. Julie Goodwin still gets a few mentions, so it seems there has not been a re-edit in light of her drink driving. Lovely to see people like Glowing Elena, Adam (Sidenote: Mr 6 and I made his sushi sandwiches at the weekend) and Billie again.
The wannabes are told their audition dish will be created in the official MC kitchen for the first time, and the past winners will be there to mentor them.
First up is a youngish nonna who was brought her more stereotypical nonna mother to the audition. She makes ricotta-stuffed gnocchi with a burnt butter sauce. She dresses the salad, so we’re already streets ahead of 90 per cent of MKR contestant, and this is just the audition round.
Gina has to wheel her trolley of food past giant photos of past winners snapped as they cook on the show.
The dish looks fabulous and the judges are impressed. Of course, Matt has to go fetch older Nonna and she is lapping up the attention. Gina gets an apron.

Young Reece from Newcastle is making a mandarin nougat with beetroot nougat. He has been pitched as a food nerd. Julie Goodwin is his hero so the judges call her in to the tasting. Julie does the “oh yum” and does a good job pitching him. Gaz thinks the presentation could be better but the flavours are great, so he’s in.

Adele, who has an American hubby, is making Southern fried chicken waffles. She’s in.

Brett does Moreton bay bug with tortellini and it looks pretty and cheffy – in.

Lochie serves up an Indian banquet and George says it is the best Indian food he’s eaten on MC (take that, Rishi!). Cue bug with cute son.

Real estate agent Craig is doing crusted lamb cutlets with jus. Sounds yum but is it special enough for MC? Gaz says the lamb is a tad undercooked but the roesti is soft. Matt says it lacks finesse. Craig does his best sales pitch for a spot – no.
We get a string of fails and there’s a kid in the audience with a mullet. One woman has served a hot dish with dried ice that makes no sense – you can tell she thought it would make it look cheffy. But she has a sense of humour about it, telling old nonna afterwards “it was pretty bad”. Billie and Elena walk her in to the judges and she is freaking out.

Kristen from Adelaide is doing a dessert and she gets the shy, talented girl edit. Billie and Elena walk her in. She works in local government and thought she was too fat to be a chef. Oh, Kristen … are you sure you’ve been watching the show? Yes, there are your skinny, tattooed types but there are plenty of MC chefs who are the opposite. Her honeycomb dessert looks fab. It’s a yes and there are tears. I really hope she can cook savoury dishes also.

A lady gets through on a Mexican dish while Sarah with the red hair gets high praise for her wallaby dish that has that cheffy forest floor look.
A young lad gets the nod for wontons. Janine serves croquettes with chipotle mayo and they are wolfed down – yes.

Tim from Sydney works in retail for a butcher so of course he’s doing a massive steak. He’s very likeable. Gary is in heaven but Matt says the miso butter needed work. They send him to cook again.

Also cooking again are a girl who made neither her spring roll wrappers, nor her noodles. Ben with a salmon pie cooks again.
A nervous girl with a bow in her hair who made a lemon pie and praline has to cook again.

And we’re done.
So they are going with an inspirational, personal approach this year. After the draining antics of MKR, MasterChef is such a relief.

Oops, I thought that was the end but there is more. There is a likeable prison officer from SA. He grating a fresh coconut for his rendang and confesses to Adam “I’ve never done this in my life” as he uses the coconut machine. Sachi cooks the roti in front of the chefs and it’s like an egg net rolled into a cylinder. He’s just stoked to be there. Gaz lives the complex flavours. He pops out to get the kids and we learn he cooks a lot of different cuisines. It’s a yes – Adelaide is doing quite well thus far.

In the break we get the ad for Intense Matt spruiking olive oil. I hope he makes a guest appearance but I know he has a new baby and his restaurant is doing well, so maybe not.

DJ Khan from Melbourne has made pork belly with various cheffy bits and George and Matt ply Gaz with crackling until he says yes.

Meta (?), who is an older gent, makes shiitake mushroom chicken and his background is a nomadic Asian tribemknown for its fatty foods. They love him – yes.

Houda from Sydney is making a filo Middle Eastern dessert and she’s doing the pastry from scratch. Not easy. She’s a social worker. She wants to run pop up kitchens to teach disadvantaged families how to cook. Her dessert looks delish. Please let us have a great Middle Easter cook on the show who lets her food do the Talking, unlike that MKR horror show.

The bloke in the loud shirt who’s been in a lot of shots is making octopus. Also is doing it for his nonna (who’s alive). Can we get a show called MasterNonna. He does his occy sous vide then chucks it on a grill pan. George makes a show about whether the occy will be tough but his knife slides through it like butter. It’s a yes and now we really are done.
Only six aprons left.