The end is nigh. Who will win? Kim and Suong or Alex and Emily? 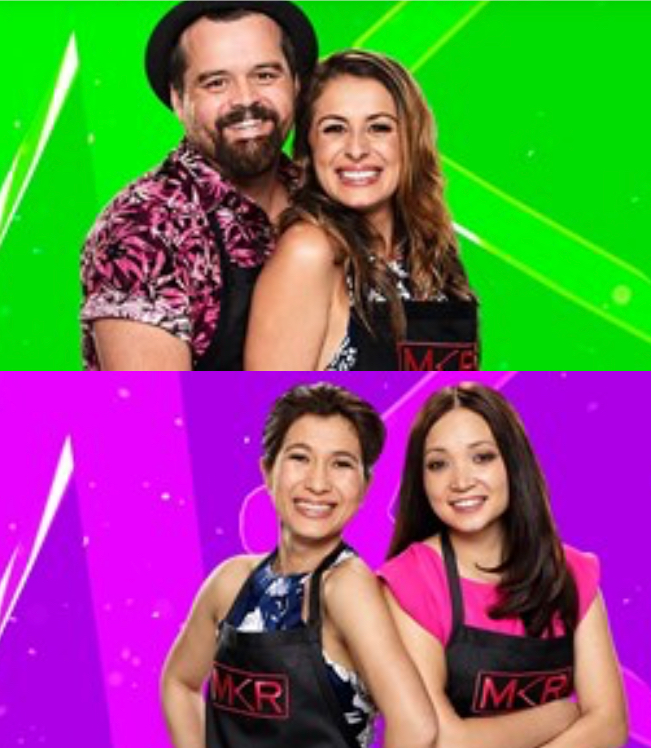 I hope they cut to Anna for most of the commentary – preferably with a wedge of cheese in her hand.
Vote in the winners’ poll.

I skipped the first 10 minutes but I imagine it was a montage of family, passion, cooking lows, cooking highs, yadda yadda.
Cut to Kitchen HQ and they have to prepare 100 dishes per team.
Kim and Suong are doing:
Wagyu with mustard leaf
Quail with Viet XO sauce
Tiger prawns with red sauce
Viet beef stew
Coconut creme caramel with citrus salad.
Right from the start their benches are full of rubbish. Put scraps in a big bowl, ladies!

I’m glad they are finally doing a classic dessert and just adding some Asian flavours. If it works this will be their first dessert success – better not be too sweet,

Alex and Emily are doing:
Tuna tartare
And we don’t hear what else they are doing as Mrs Hat is already panicking about time, before the first course is even served.

The booted contestants arrive (including visibly pregnant Mrs Military, which shows you how long it’s been since the comp started. And several teams I have blocked from my memory) then the families and K &S’s kids are so darn cute.
Oh god – Mr What’s A Colander? is here and he has never eaten raw fish. Over it.
HH entree looks far prettier but no doubt KS will have bags of flavour..
The judges sit down at the “blind tasting”. Oh yeah, I bet Kim and Suong made the tuna tartare with cumin mayo.
The judges love the tartare and there are no negative comments. The judges all like the Viet dish but Karen thinks presentation could be better for grand finals.

COURSE TWO
Kim is deboning 20 quail – that’s a lot of work.
HH are doing lamb brains wrapped in jamon. It’s a very cheffy menu.
Mrs HH is freaking “I just feel like I’ve been left to do this myself.”
Mr HH (confused): “Well, that was the plan, wasn’t it?”. Because he’s just been sitting around, not doing anything at all.
Suong has burnt some quail and then drops a bird. Kim wants to give her the bird.
The judges saw the brains are cooked properly and it’s a well thought out dish.
The quail is also cooked properly and the soz is great. Pete thinks it’s a perfect dish. Why are we seeing Steve and Roula critiquing dishes? They have proved their food knowledge – rather, their lack of – months before.

THIRD COURSE
HH are doing Moroccan lobster. I’m worried they are not “respecting” the “hero” of the dish.
As they plate KS realise they are two prawns short. So we had Quail Gate and now Prawn Gate. The plates looks pretty messy, although it’s to compete with food served in a lobster shell for looks.
The judges love the prawn dish but Pete concedes it ain’t pretty.
They are puzzled by the flavour combo of the lobster and Manu can’t fathom why they did not serve it with the harissa butter.

FOURTH COURSE
HH are making crispy pork belly with Calvados soz. I am going to use his truck of flattening the partially cooked pork with a heavy tray to ensure an even look.
At plating time Mrs Hat starts crying over a perceived slight. Sigh.
On the other side of HQ, some of the creme caramels for dessert are overcooked.

This is probably the time they have a break and do the next day’s filming.

The judges are happy with HH’s pork crackling. Colin says it’s a great dish – and he knows his pork. He’s impressed with their time management.
The judges adore the soz of the Viet beef stew and the tendons. They don’t say anything about the carrots oddly draped over the top of the cast iron dishes.
In the waiting room KS are arguing loudly over the overcooked dessert. HH have to sit there awkwardly.

FIFTH And FINAL COURSE
Suong is attempting to remake the creme caramel in not much time at all.
HH have called their dessert Penicillin. Why? It’s involves ginger jelly, lemon parfait, whiskey caramel and gingerbread.
They have even pulled out the dry ice for presentation, shown as dramatic Willy Wonka type music plays.
KS thinks their new creme caramels have worked.
HH’s dessert look restaurant quality.

Pete informs us the Penicillin name is a play on a cocktail.
Colin says the tuile adds nothing to the creme caramel, which Manu thinks is a bit overcooked.
The judges have fun pouring the whisky over the dry ice – after Colin takes a swig. Karen says presentation is 11/10. They also love the flavours.

Two hours in and we still have to listen to judges’ feedback to contestant. Let’s just fast forward to the scores:

Cue one of two prerecorded “winner” endings.
HH definitely cooked better tonight / they deserved the win, they will need it to pay to send Emily on a meditation retreat. Or buy Mr Hat some more hats – although, after this, he may never wear a hat again.