Thanks to Bobi for a new general chat post. I read today there are only 12 Mondays until Christmas so a trying not to freak out – Juz

It’s October, one month closer to Christmas, and it feels like everything is winding down or coming to an end (Here’s looking at you, MasterChef).
I know they’re not. I know that we are waiting for Love Island, something to do with Dirty Dancing and Survivor US but it all feels a bit lightweight and second choice.

To cope with withdrawal symptoms, I have been immersing myself in real reality tv, but being proper real TV (PRTV), it is mostly on SBS and ABC, and is designed to reduce me to a sobbing, blubbery mess.
Just a side note, I am a pre-inclined that way. Remember the Telstra ad telling us to “Call home”? (Slight whimper). 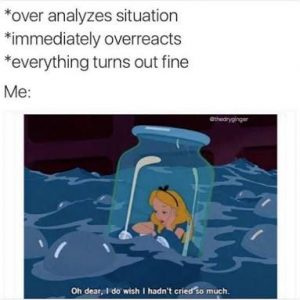 The original and the best reality show is 7 Up (and is being repeated on SBS). There is something about growing up with these people, and eternally waiting to catch up every seven years. They are my age and all their experiences are mine. One of them has died (Spoiler Alert) and one of them is very sick. It’s like losing a friend. I am very sad. I am not sure that this is for everyone. It doesn’t lend itself to binge watching.

So, of course, I move straight to Old People’s Home for 4 Year Olds to cheer myself up. I was warned that there would be happy tears. Correcto! They were mostly happy tears, but were mixed with a huge amount of indignation. Did you know that 40% of the elderly in nursing homes don’t get visitors? How can that be? I didn’t want to watch this one but so many people insisted I should give it a go, and I am really glad I did. If the Government had a humane bone in its body, it would put a bucket load of money into making sure that this experiment happens everywhere.

But my favourite was Storm in a Teacup. It’s about the partnership between Leon Pericles and his wife/business manager. She has dementia and he’s not coping. He’s from your neck of the woods, Daisy, and there is some vague similarity between your artwork and his. 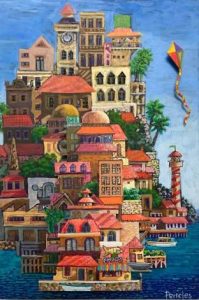 The show started happily enough because she’s a happy soul, and I thought all would be good but, by the end, I ran out of tissues and the couch was wet. I was a drippy mess. It was a lovely show. I highly recommend it, if only to see the flying of the kite he designed. He is an amazing talent.

And out of left field, Season 2 of Disenchanted has returned to Netflix. It’s not as good as Season 1 but I needed an antidote to all the political news. Have I mentioned previously that the world is going to hell in a hand basket?