Over to Daisy for the latest Forrester shenanigans (thank you):

What can I say? Shame on all of you Forresters.
Brooke, kick that grasping Rasper to the curb. He’s just an old lech. Truth be told he would suck onto any lips. Brooke needs to go back to sleeping with her juniors, perhaps Thomas. Now there’s an idea. She could put a spoke in his wheel with Hope and he could put a spoke in her wheel with Rasper. Why not? They are all sick or anyway.
Quinn, kick that barnacle, gold-digging friend, $hauna to the curb. She is eyeballing your mansion and wants what you have. Always beware in that situation that you could wake up to Eric and $hauna having accidentally switched bathrobes. She told Floppy Flo to shut up about the kidnapping because of m💰ney. She has “had her share of men”, but never struck gold, although in reality, she would have gone after $torm with a paternity $uit. Quinn needs to stop being boring. I don’t see her as a girly girl who would let her friend cut her grass, or even sit on it. I said, “sit”.
Eric, kick that leech $Shauna out. Before she starts stealing the silver.
Hopeless, stop walking around town in your dressing gown. Stop fantasizing over Douglas. It’s weird when you are ignoring your own baby. Kick Roach to the curb. Keep Liam…if you can, with baby Momma Steffy waiting to pounce.
Sally, kick Flubber to the curb. Too many reasons why but foremost; he is a whinger who needs to go back to having sex with his Mommy.
Liam, get a job cooking quiche and selling it from a van. No one believes you can run a company. In fact none of them could.
Steffy, kick Rasper and Thomas to the curb. Rasper, for expecting you to forgive the Roach and for agreeing to Roach’s idea of a fashion showdown. (What dickhead dad agrees to pitting his kids against each other? Oh wait. Eric did). Thomas because he tried to cover up the kidnapping. 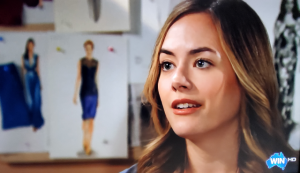 Katy, kick Bill to the curb. Drop him before he drops you. As soon as he discovers Brooke is free, he’ll be showered and lathered in Brut, and over to her place. Only she is already cuddled up with Eric. Quinn! Forget the Barnacle and pay attention to your own love life.
These are the dumbest bunch of high flying tycoons in LA.
Thomas is a virus. Rasper is a lech. Brooke is a reformed husband stealer (yeah right). Flubber is a sookie.

Oh wait. I am just watching tonight’s episode and Hope grew a pair, if not a brain, and flounced off in her blue floral dressing gown, telling Thomas she would rather eat a bowl of maggots than work with him. Liam barges in to save the day in his little super hero cape, minus the leggings. I hope that Hopeless for the future doesn’t include a line of daywear brunch coats. Or doooo I.
-Daisy 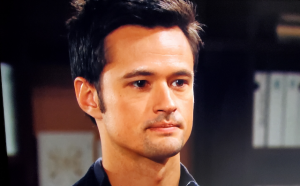