“Week 3 in the jungle is it, Docteur?” They have been racing through the evictees this year. I’m not a happy Jan (where does that expression originate?) because I want to get to know what the campers are really like. We finally get Charlotte to shut up a bit, but too late: Billy Brownless, Erin and Tom, all ones I liked for various reasons, are gone, while Baboon Bum lips Charlotte and Snoozefest Ryan remain. Ryan made Tom look like he had a big personality and keen social skills. I wouldn’t be so harsh to Charlotte if those lips were a birth defect instead of a choice. And if she didn’t talk about herself all of the time.

Remaining we have Daisy Dave who has made a few hilarious comments. Myf who has depth and listens to others. 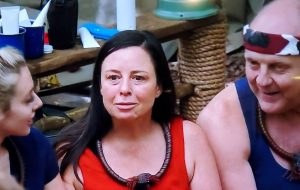 Ronda who is doing a good job of storytelling and pulling funny faces. Coz the magician, who is a humble sweetheart. Slowburn Tanya who when she gets a word in edgeways, isn’t too bad. 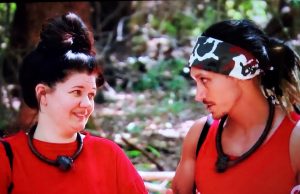 Cheerful, kind Miguel who might win. Perez who wants to prove to the world that he is nice…myeh. Ryan, who probably won’t win because he has taken on second fiddle to Charlotte. And Charlotte who is annoying lots of people in abd out of the camp but who might still be in the last 3 if she can get the votes from young ladettes.
This year, there is no bitchiness between campers. They have shown great tolerance of Charlotte, and are getting along really well. On The Project, Nikki said that Charlotte gave her the shits, yet she didn’t express that in camp. Erin was straight about finding her a pain, but Tom and Billy described her in a positive way.

It seems that the show will wind up fairly soon, which will be a bit disappointing. I still want to see if there are some interesting personalities there. I predict Perez will be gone next. My favourite now is Cos. How about you? 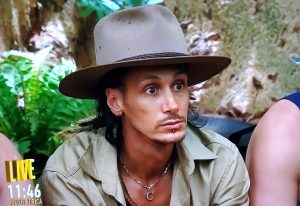