It’s movie challenge night and the teams have to create a dinner box for 300 families, consisting of a star dish and some sides. So I’m expecting ads for KFC in the breaks, offering a similar product.
Tasia and Gracia look scared when they hear 300, but it’s not like they have to cook 300 actual portions of their food.
Paige is back after her hand surgery and I can’t see a bandage. 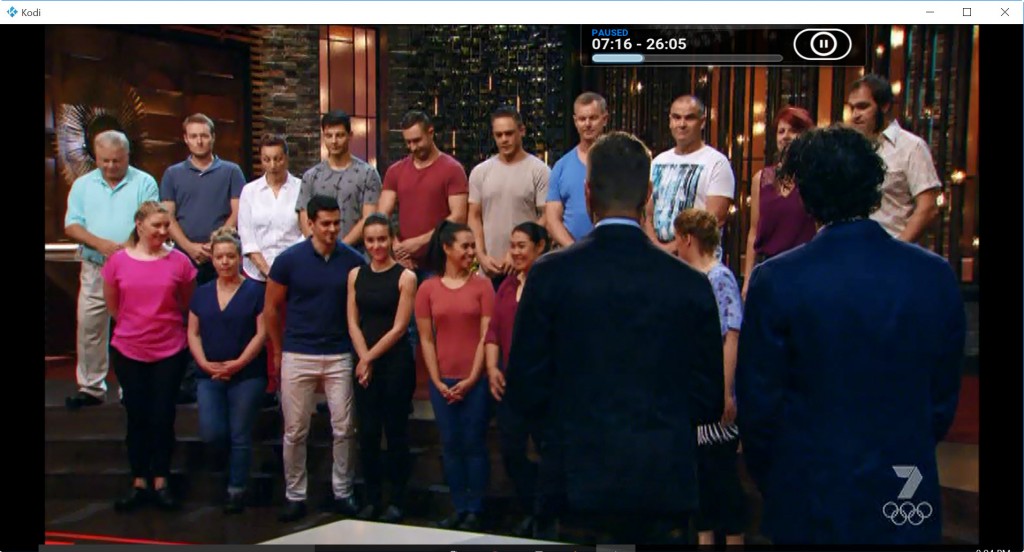 And in the next scene she’s driving the car to Coles, so that fish fin injury can’t have been too serious, even if they did have a break between filming (although later she does mention she’s having trouble carrying things).
Lauren and Carmine get to sit this one out because they won with the fisherfolks’ hearts with their straightforward salmon dish at the seafood challenge.
Are we missing JP and Snow White? Not on your Nelly. We spend a good minute promoting whatever car brand that is and the show is now called My Car With a Reversing Camera Rules.
Sisters are cooking Korean fried chicken with miso corn and cabbage salad. Yum – winner, winner, chicken dinner.
Jordan and Anna are doing Mama’s homemade pies with mash and peas. Anna is making not one but two pastries. Shortcrust is a quickie but puff is tough – these guys sure do like to challenge themselves. They are a world away from some of the others in the comp.
Mr and Mrs Chops and Zana and Plus One are first ones back to the warehouse, so they’ll have the longest cooking time. Chopses are cooking lamb rogan josh with pilaf rice and chapati.
Zana and Gianni are also doing lamb – always a crowd fave: Lamb souvlaki with lemon potatoes and Greek salad. We know from the ads they struggle with time management, yet they have chosen a dish that has a long cooking time.
Curlies are making katsu chicken bento box with pork dumplings. They’ll be battling the Sisters for title of tastiest fried chicken, but I’m not sure if another meat element is a good idea.
There’s more lamb on the menu, with the Dads doing lamb kofta with quinoa and pomegranate salad and haloumi (aka tastiest fried cheese in the world). It should be quick for them to make and sounds like something the grownups will love – just don’t think the kids will go for it. They could just eat the meat, since it’s on a stick.
Finally the boys arrive and get on to their cola ribs with onion rings and slaw. I hope they have enough time for their ribs to cook properly. It has a similar vibe to the tortilla they did well with at the Rio challenge, so they may live to fight another day.
Tarq and Dad are making chilli con carne with blackened corn and iceberg wedge salad.
Rosie and Paige are making pulled pork burgers with chicken bites and chips. Again, not sure about the two proteins in one dish.

The judges are watching the action and Fass is particularly excited by the thought of Anna and Jordan’s pies. 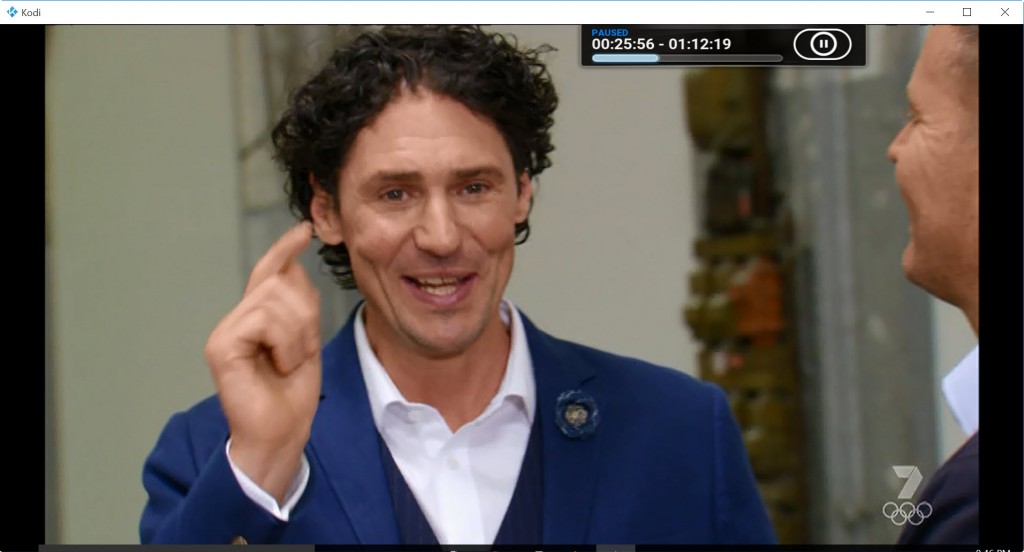 Any Ben and Holly fans out there (if you have young kids you’ll know what I mean). He reminded me of the gnome.
https://youtu.be/99bxsMNviZQ?t=7m34s

Pete is excited by the Sister’s Korean Fried Chicken. They are wisely slashing their drumsticks to help them cook evenly, so there should be no raw chicken disaster tonight. The girls are doing their bickering thing. “Concentrate on your mayo; don’t screw it up,” says Tasia. Or is it Gracia?
Zana is having potato dramas; they’ve stuck to the tray and seem to be swimming in liquid. They do not do well at these away from the kitchen challenges. 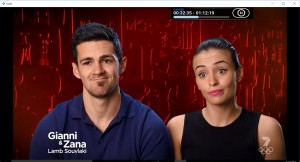 Fass pops over to spook the Miners and implies to Paige her planned method of cooking chips is rubbish, so you know there is trouble ahead.

The families start to arrive and it looks like it’s going to be a fun night for them. They’ve brought eskies with them, so hopefully there’s some backup food in there for if they get a dud dish.
Service starts and the Sisters’ dish looks delish. Anna and Jordan’s pies aren’t ready and Zana is, as always, not ready to serve. “I feel like I’m cursed with the outdoor kitchens,” she tells Confessional.

Time for the judges to taste …

They love this one, which comes with toasted cheese soldiers for dipping.

This gets the thumbs up and Fass notes a lot of work has gone into it. Good on you, Chopses – you started off shakily but are reaching new heights every challenge.

The Dads get the thumbs down for their bland koftas but the salad is tasty.
Tasia and Gracia are having trouble keeping up with the demand for their chicken, so the Miners kindly let them use their deep fryers. Aw, good on you, boys. You’re still learning to cook but someone sure raised you well.

How do you think #TasiaGracia will go with their fried chicken? #MovieNight #MKR pic.twitter.com/tBeHZ2X3LZ

Pete and Fass tear into the Sisters’ chook and they are loving it. I want a bucket delivered to my house. Fass: “I’m not going to talk; I’m just going to eat.”

What did you think of #MitchLaura‘s Bento Box? #MovieNight #MKR pic.twitter.com/UGahUJzKff

Mitch and Laura (aka Curlies) rice is overcooked – which they know – but as a whole the dish is “flavour plus”. They’ still looking solid to make final four.
Oops – there’s no pic of Paige and Rosie’s pork sliders and nuggets, but you’re not missing much. As expected, the chips are no good (soggy) and Pete says the nuggets are all batter. The pulled pork burger is dry. Oh dear – no doubt the girls have had a few sleepless nights since Paige injured herself, and this is the result. They are definitely in danger.

How do you think #GianniZana will go with their Lamb Souvlaki? #MovieNight #MKR pic.twitter.com/fLlziHXL5K

The lamb is a bit dry and underseasoned (the second most often uttered phrase on MKR, after “where’s the soz?”) and the Greek salad doesn’t seem to be dressed. The pita bread is good, at least. These guys need to work on their time management.

What do you think of #AlexGareth‘s ribs? #MovieNight #MKR pic.twitter.com/SyaWUBcUh2

The Miners cop a caning for the sweetness of their ribs and their weird honey dressing. “That is a shocker of a dressing,” says Fass.

Pete’s not happy, Jan, either.

Would you buy Mama’s Homemade Pie at the movies? #AnnaJordan #MovieNight #MKR pic.twitter.com/0ltvMdpz9Y

We see the judges taste the pies and then just get Pete saying: “I’ve got three teams jockeying for bottom place and we need to pick two.”
Editors, is this meant to make us think the pies are bad? Because it’s obvious they are fabulous. Pete’s bottom three would have to be Paige and Rosie, Zana and the Miners. I think the Dads will be safe because they had other tasty elements.

It’s back to Kitchen HQ for the judging lowdown. We already know most of it. Curlies are stoked to hear Pete describe their tonkatsu sauce as “a revelation”. Zana’s dish was mediocre, and she knows it. 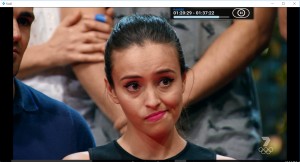 And now to the pie praise: “Mama did well. She knocked it out of the park,” says Fass. They did amazingly well to make the two pastries, chicken and leek filling, peas and cabbage, mash and their own tomato sauce. They have yet to put a foot wrong.

And People’s Choice goes to … no surprise: Tasia and Gracia. They are stunned.
And off to Sudden Death are … Rosie and Paige and Alex and Gareth. Not a surprise – Zana is lucky she makes awesome bread.
Poor Miners, but they absolutely deserved it.

So, sudden death tomorrow and the Wednesday synopsis is: A quintessential family favourite, the Australian Rodeo is the backdrop for today’s challenge. Teams must focus on creating an unforgettable marinade that’s full of flavour for their BBQ based dish.
Sounds an awful lot like a barbie challenge they did for MasterChef last year.