Who will survive the first elimination? Find out tonight at 7.30 on TEN. pic.twitter.com/icBBmyMtc3

The TV blurb says: In the first elimination challenge, three contestants choose a cloche containing a single ingredient to be used in a dish for the judges.
So, let’s hope the bottom 3 can shake off the TV jitters and put up some great dishes. Who do you reckon is going home: Charlie, Theresa (sister of Jimmy) or Ashley (the beardie one)?

JUST A FEW THOUGHTS AS I WATCH (SA TIME) …
Ok, I’m going for Theresa just because no grown woman should have to sleep in a bunk bed. These aren’t Top Model teens, MasterChef. No doubt she hurt her hand trying to clamber down to find the loo in the night.
Love a good cloche challenge – I hope they show what was under each one. Wouldn’t it be good if one just had a cup of water in it to mess with their minds?
Charlie picks the cloche with fresh ginger. Beardie Ashley get mushrooms. Theresa – after praying it’s not shellfish – gets prawns but is worried a second pick will turn up something weird, so she sticks with them.
The other cloches had oranges, seaweed, pineapple, venison, mint, cardamom, coffee, broccoli and licorice. What, no offal? That must be later in the season.
Theresa uncertainly says she’s doing doing prawns with tarragon butter and prawn oil mayo with avocado.
Beardie Ash is making another bloody ravioli, trying to redeem himself from a similar dish in last night’s Mystery Box challenge.
Charlie is doing a ginger chocolate cremeaux. The worry is chocolate will be the hero, rather than ginger.
Theresa is still frazzled and the judges are trying to talk her out of having so many oily elements on her dish. Focus, woman – the just want you to chuck some salad or something fresh and acidic on.
Ash is doing the oh-so-trendy 63-degree slow egg with his mushroom ravioli. But he’s stuffed up his pasta dough. Again. he starts over.
Theresa is doing some weird thing freezing a layer of avocado in the blast chiller.
Luckily for them, Charlie’s cremeaux has split. Quick, Charlie – do a ginger custard or one of those soda siphon microwave sponges. But, no, he decides to make it all over again. Aargh, Charlie, it’s not going to set in time! He candies some ginger as well. However, he’s happy with his second cremeaux so the dessert gods may be smiling on him.
Ash is feeling confident, so of course he’s jinxed himself and stupidly chucks his ravioli in a frypan with hot oil. He says it’s too late to do anything, but could he not have just fished them out?
Time to judge
Cravat update: Matt is wearing a white cravat with a blue coral-type design.
The judges try Ash’s ravioli first: The flavours are classic but the egg is a bit overcooked and the ravioli skin is tough from frying. Good in concept, poor in execution.

It’s Theresa’s turn and she’s still freaking out. Her prawn oil crisp thingie looks yummy, but it’s the most complicated part of what’s basically a prawn salad. The judges think she’s “heroed” the prawns (that’s another word to add to our MC drinking game: “hero”) and they love the prawn bickie.
Pro golfer Charlie plates up delicately and tears up when describing how his passion for cooking was stronger than his passion for his golf career. 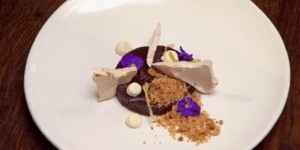 Flowers are not food.

But the judges are obviously worried whether the ginger will be “heroed”. They taste and, yep, it’s a delish dessert but doesn’t meet the criteria. I’d feel sorry for Charlie if he got sent home on a dish that was delicious, given it’s the first elimination.
Theresa wins and brother Jimmy starts bawling – awww – I’m still Team Jimmy.

When you realise it's Marco Week, next week! #MasterChefAU is back Sunday 7.30 on TEN. pic.twitter.com/wWJSywkcIh

And, phew, Charlie is safe. It would have been sad to send home someone who obviously knows so many dessert-making techniques – plus he has nice hair.
Ash drops the word “journey” in his farewell comments, thus meeting his contractual obligation. Unfortunately for the producers he does not cry into his beard.

Marco week begins 7.30pm Sunday, which I know will please many of you (although not as much as a Shannon Bennett week would). So, a drink every time he yells “Yes, Marco!”?