It’s the grand finale of 2018 and our top 24 has been whittled down to two home cooks battling it out in one final day in the kitchen.
It goes for two hours so I’m guessing fast forward the first 10 mins, which will no doubt start with Sashi and Ben “waking up” in the MasterChef house and getting ready while intoning “I’ve learnt so much … I never believed … (the other chef) is a great cook”. 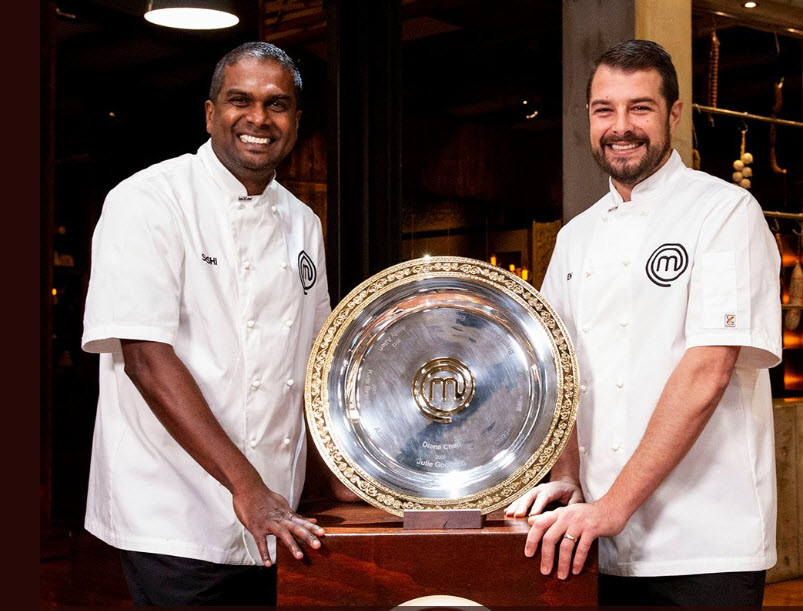 Make sure you vote in the poll before the episode gets too far in.

And so we begin …
Montage.
Matt’s magenta suit.
Family hugs. Sashi’s extended family have been flown in from overseas. Ben’s folks are just adorable.
Talking head: Khanh is backing Ben.
George: There won’t be the usual three rounds – it’s two.
Rounds one and two are now a “mega round”. They have to do a starter and a main. Oh, and that’s only round one. So, really, nothing has changed at all. George was just talking tough. They have to use hero ingredients from a table out the front. Starter is served whenever and main on the 90-min mark.

Ben is doing a blue swimmer crab starter with finger lime (hero: crab) so he can churn it out quickly and get on to main of battered fish and peas (hero: peas) – all classic Ben and playing to his seafood strengths.
Sashi is making sambal prawns (hero: chilli) and fish curry (hero: snapper). He’s cooking both dishes at the same time as his pastes need cooking out. I’m expecting a Sashi scramble for time.
Everyone on their gantry gets their turn to make the edit – Ben and Sashi must be being driven mad by all the shouting.
Ben is taking a while to shell his crabs – surely this is a misdirect by the edit?

Ben’s starter is not a huge hit as it’s too creamy, with not enough acidity. Sashi’s prawns have the judges salivating just at the look of them. He gets the swelling piano. They love it. Starter goes to Sashi.

Ben has a chance to redeem himself with the main and his beautifully filleted fish but he puts his battered fish directly on the fryer’s wire basket, instead of dropping it into the oil. It sticks! Oh no, Benny – you’ve kept such a cool head throughout the comp in all those times you wore the black (the MC equivalent of being sent to the Wall).
One judge will get the dodgy bit of fish with batter missing.
They taste Sashi’s aunt’s curry first and there are “ooohs” as they pour his sauce. Only a fish bone will save Ben at this stage. Matt says Sashi – who has faltered off late – is firmly back on track with what they expect from him flavourwise.
Ben is next and – oh no – the judges say the batter is not right! They look disappointed. Ben is going to be devo. And, even worse, his family! There won’t be any of this “it’s so close” rubbish.
Ben should do well in the Heston challenge but it could take Sashi burning a page of his recipe again to take the win.

“There’s never been a gap like this in the history of MasterChef,” George tells Ben. Geez, way to help George. But then we get the inspirational fighter music as George reminds us that 12 months ago Ben was ill and could not even work. Go, Benny – keep that stoic face and keep plugging away.

PRESSURE TEST
Heston Blumenthal enters and seems much peppier than his last few visits – perhaps because he does not have to perform for a whole week this time.
Reece and Jess immediately leap off the gantry and offer to tag out Ben and Sashi …
Ok, no, but Reece does this at the sight of Heston’s dish. 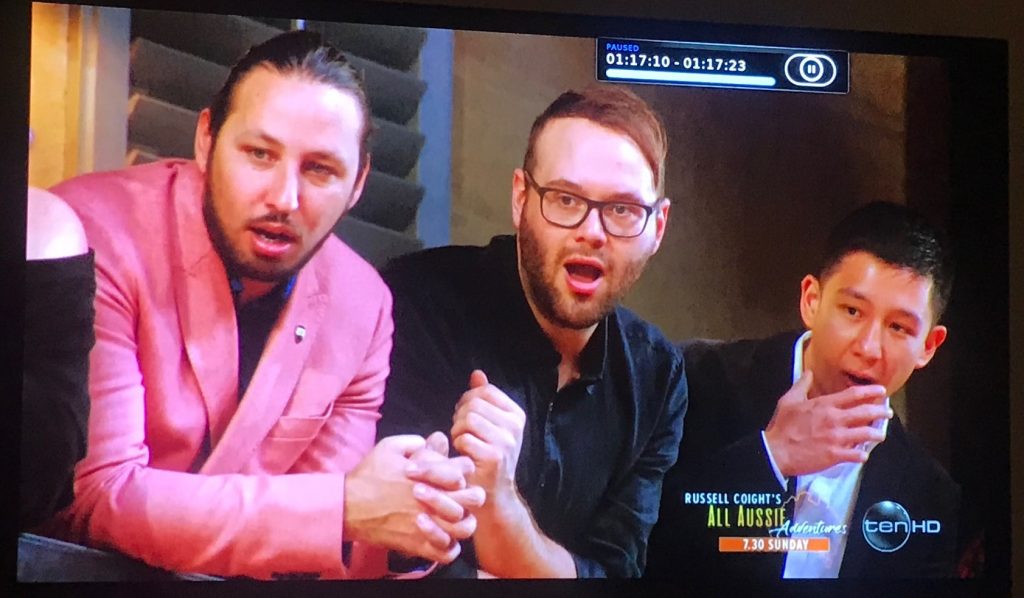 I knew I could count on your reaction face, Reece.

It’s some weird white dessert on a pillow floating in mid air. It’s called Counting Sheep. Of course. The freaky lozenge things on the pillow are meringues. The rest of the dessert is on a plate and it’s all white.
Heston tells us 50 times the meringue is “incredibly light”. The boys even have to eat the dessert with white spoons. Honestly it does not look that appetising – the lack of colour is meh. Crumble, steamed sponge, yoghurt powder, a sprayed mousse dome (Heston does loves his sprayed domes), coconut ice cream and some purees.
George says there are 84 ingredients. They get five-and-a-half hours. Bloody hell. It was just last year that poor Diana collapsed, weeping, at the end of the marathon finale challenge. I don’t like seeing contestants “broken”. I want it to be like GBBO, where they all get a cup of tea while their cakes are baking.

The boys are using a lot of ingredients that are unfamiliar to them and Ben buggers up his coconut ice cream. Nooo! Luckily he has enough ingredients to make enough for the two scoops required.
Wow, this is really thrilling, watching the guys mix up white powder. And then some more white powder. And more white powder.
That pillow at the start must be so the judges can take naps in between takes.
Ben pops his white dome centres into his mousse domes, and here Sashi’s first crack shows: He has not put any filling into his mousse before popping it into the blast chiller. Luckily for Sashi Gaz pops over to tell him he’s made a terrible mistake. The mousse is already set.
Luckily the shouts of encouragement from his son have magical powers and he gets it together.
Ben loses one of his sweets on the floor but it’s okay – Aldo is happy to hoover it up.
Ben’s mousse domes turn out well but the Magical Son Powers have failed Sashi this time – his domes are a sticky disaster. Back to the blast chiller. Second time round they look good.
It’s looking like the white dessert will propel Sashi to a whitewash win and cement his star status amid the millions of MC’s Indian fans. And I hope he does open a restaurant in Adelaide, because I’d love to try one of his curries.

THE JUDGES TASTE
The desserts are … white. And, yes, the judges have to use the silly fluffy white spoons. Why doesn’t George have a pair of tweezers with fluffy covers?
They like Sashi’s coconut ice cream and sponge texture.
It’s Ben’s turn and he gets a little choked up talking to the judges about how much he loves food. I’m going to say it again: Awww, Benny!
His meringues get a “wow” from George and Heston says the Ovaltine flavour is good. The panna cotta was excellent and Heston seems pleased. But, as we know from previous years, they always make the final round comments fairly evenhanded.

It’s time for the scores and the past winners are back, along with the season’s guest chefs.
And this time at least, Ben gets to hear some lovely comments.
Ben: Gaz 9, George 9, Heston 9, Matt 9 GRAND TOTAL: 77
Sashi: All 9s. GRAND TOTAL: 93

SASHI WINS (and it’s the highest score ever in a MasterChef finale)
Sashi and Ben, as expected, say lovely things about each other and Sashi is reminded, to his horror, that as part of the prize he has to write a column for Delicious mag.
Ok, Sashi, go have a rest on Heston’s pillow.