Over to our Bold correspondent Daisy (thank you):
I am sitting at my local café writing this. It’s no Il Giordino’s, but at least I don’t have to worry about any Forresters, or Sheila sneaking up to eavesdrop on me, although I’d be ok with Dollar Bill showing up to foot the bill. The menu here’s not fancy but there is no surveillance crew and I won’t get blackmailed…or kidnapped.
November saw a few more Forrester felonies. The brothers who hated each other from birth; Orange Lurch and scruffy, husky Ridge became best buddies so that they could stick it to Bill. They blackmailed a judge into ruling against him in a custody battle, and then threw the typhoon tycoon from a balcony. Now they are hoping that the new, miraculously healed Dollar Bill will let them both off the hook and not call the newly promoted Detective Sanwichez. It’s crisis time in Bill’s office with Judge Ham and the dirty-handed Forresters.
There’s trouble at Eric’s place. Or should I say, Eric and Quinn’s place? Not according to Pam, who thinks it’s still Stephanie’s house. Pam’s willing to work with the devil to destroy Quinn, but she is working with Donna instead. Donna has her cleavage out in every scene to remind Eric that he likes his honey between soft cupcakes. Eric is happy to take a ride down mammary lane with Donna, and doesn’t mind being her Honey Codger, but Quinn is ready to bring out the kitchen knives to burst their bubble.

Outside the immediate Forrester family (if that is even possible), Little Emma has taken a gracious bow-out, and cleared the field for Skeletor to get her hooks into Zander. Zander isn’t likely to fight her off. Emma is going to concentrate on dancing in white macramé, while Zander and Zoe make beautiful music in black macramé.
December will bring the usual boring Christmas episode, with everyone putting their evil deeds aside to sing carols to Honey Codger and his ivories. Babies and small children will be sleeping through the festivities like perfect little angels who won’t know who Santa is until they are 14. At least they are spared Eric’s Christmas serenade. But in the meantime Bill is calling the Forresters out on their “dirty little deeds”, and praising Saint Brooke for her heroism and integrity. It remains to be seen whether or not Quinn and Eric’s marriage will
survive, and if Bill sends the Forrester’s to jail. 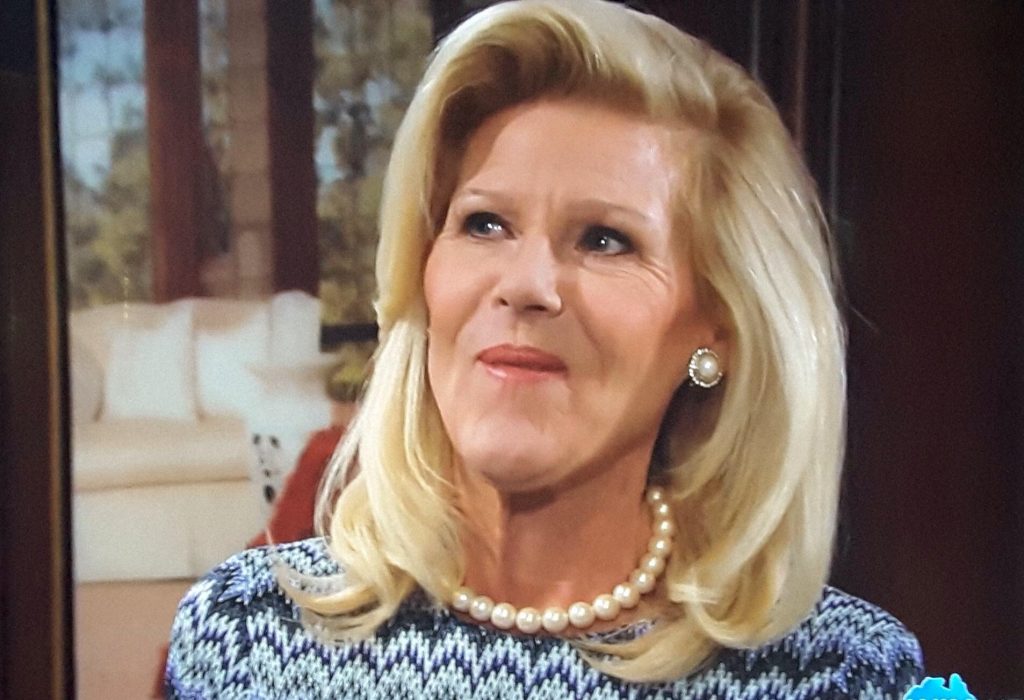 In the meantime we listen to Ridge droning on about Bill’s poor parenting. Let’s hope Ridge and Judge Ham do a little time in the slammer.
I will leave you there, with Pam and Donna apologizing to each other, and vowing to be best friends forever. Santa Baby, please bring us a Bold & Beautiful December filled with revenge, romance and reaping what you sow.
Merry Christmas. 🌲Ho ho ho.